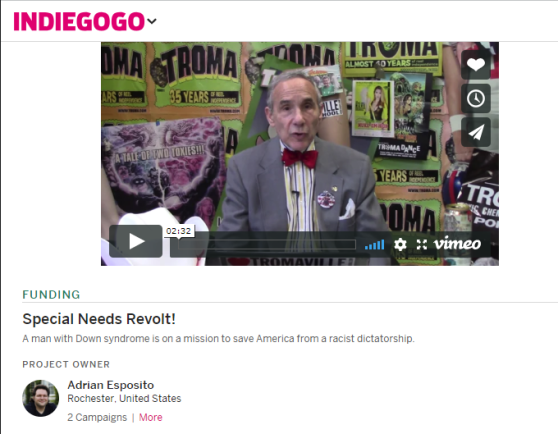 Special Needs Revolt! Is an action-horror-comedy film. The film’s hero, Billy Bates, who will be played by up-and-coming actor Samuel Dyer, is a young man with Down syndrome.

Billy wakes up from a two-year coma and discovers that the United States has been turned into a brutal dictatorship thanks to President Kruger, to be played by award-winning veteran actor Bill Weeden (Sgt. Kabukiman N.Y.P.D.). Kruger has put all people with disabilities into institutions. Billy becomes the leader of a diverse group of resistance fighters committed to ending Kruger’s reign of terror.

“Special Needs Revolt!” is also a satire on our current political situation, done in the style of Troma Entertainment. Lloyd Kaufman of Troma will appear in the film.